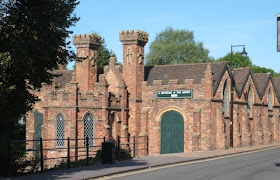 You drive through Ironbridge with the river on your left and suddenly you see a row of brick gables with a pointed Gothic window under each and buttresses sticking out on to the pavement. A little further on, the end of the building reveals its from behind some trees and your jaw drops as a pair of slender turrets – crenellated and with faux arrow loops, but far too small for an archer to stand inside – and an apse-like structure with more crenellations and pointed windows appears. Whatever can it be?

The short answer is that it’s the Museum of the Gorge, where visitors can go to learn all about the  Ironbridge area. But of course it has not always been a museum. It was built in around 1840 as the Severn Warehouse, where finished items from the foundries were stored until the River Severn’s water level, which varied greatly from season to season, was high enough for boats to transport them away. The main block, with the row of gables, was the warehouse; the apse was an office; the turrets conceal chimneys. The architect of all this was Samuel Cookson, who clearly wanted a ‘statement building’, something to stand out and catch the eye: architecture as advertisement. There are other warehouses nearby, but they are quite plain. 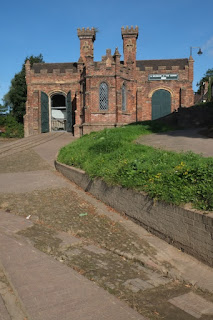 Looking at the end of the building, one can see a bit more clearly how it worked. On either side of the office are large doors, through which big cast iron objects could be wheeled on carts down the slope to the river. The paved slope has grooves – plateways – along which the carts would run, down to the sandstone walls of the riverside wharf to the waiting Severn trows.

The ironmasters of the industrial revolution liked to show off the versatility of their chosen material, making furniture, signs, even coffins of iron, as well as the more expected industrial machinery and bridge components. But this area was not just a source of iron, it was also rich in clay, spawning potteries, tileworks, and brickworks. Cookson’s extraordinary building is an example of what Ironbridge’s brick workers could do when they tried.
Philip Wilkinson at 8:00 AM
Share